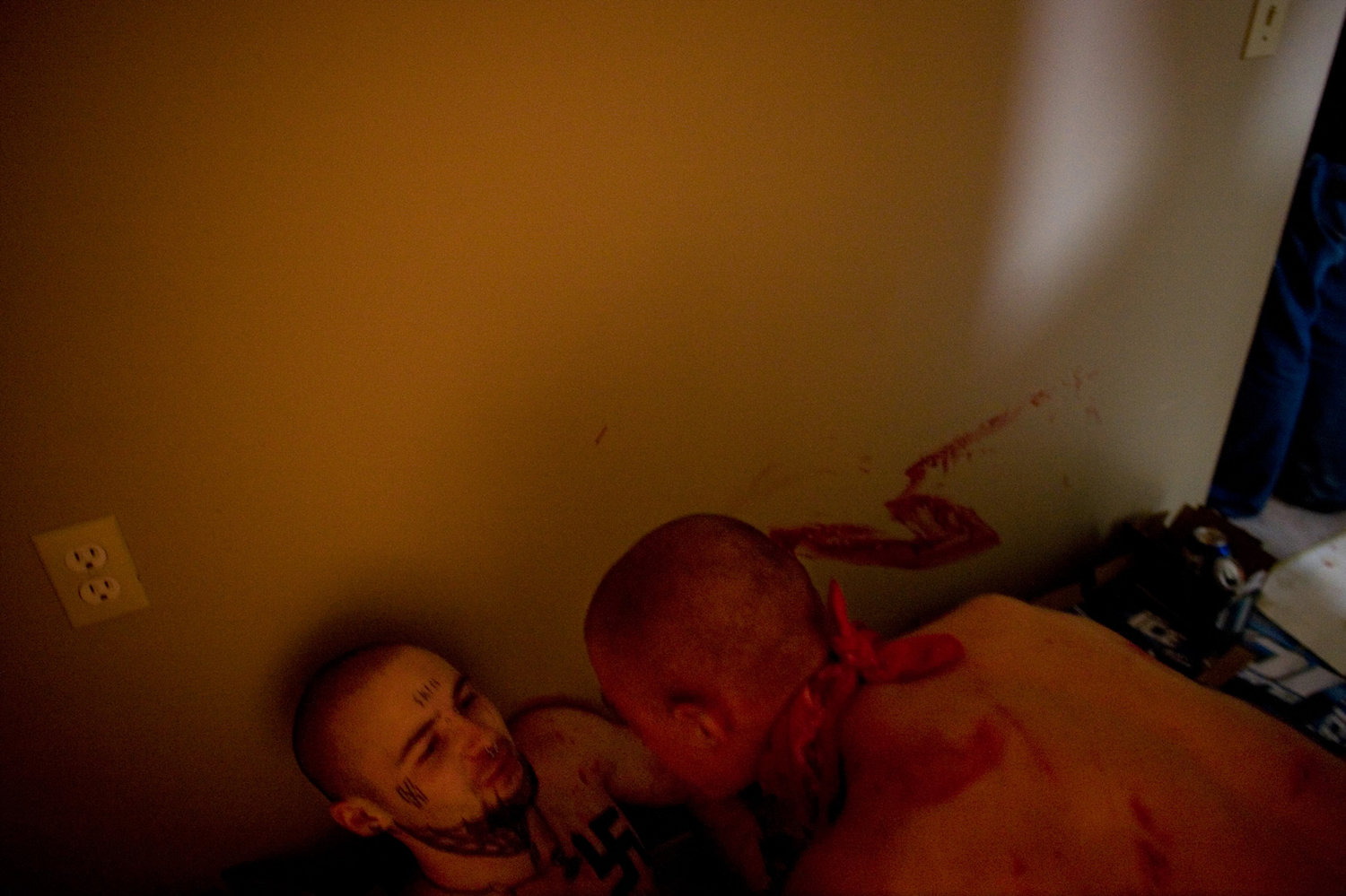 Back in 2013 we published in our subculture issue a project by Brett Gundlock, which explored Neo Nazi’s in Canada, where Gundlock spent time with individuals whom all belong to the Ayran Guard. With far right politics and opinions dominating the world and have been given a platform through the likes of Trump, Boris Johnson and Jair Bolsonaro, we revisit our interview with Gundlock who sheds light on his intimate time with a group of people whom are no longer on the fringes of society, but dominating the headlines.

Hi Brett, thank you for taking the time to answer a few questions about your project ‘The Movement’. My first question would have to be what led you to document the subject matter?

While working for a newspaper in Calgary, Alberta, Canada, I stumbled upon a very vocal skinhead group called the Aryan Guard. My assignment was to cover this group’s first annual march through the streets of Calgary. I guess I was naive, but to learn what these guys – and groups like them around the world still existed. It really surprised me. I had to know more.

Within the series the subject seems at ease with you being there, how did you approach the subjects?

I approached the group directly through their website. It took a fair bit of time and a lot of interesting interrogations by the skinheads, but they eventually let me into their world. After a while I blended into the background, allowing me to photograph the group and their activities candidly. Through this group I made contact with other groups. My relationship with the Aryan Guard worked as a reference to gain access and photograph other groups. Thanks to the internet, the social web of these groups is really widespread. They are remarkably easy to find once you are looking for them.

Can you talk about your favourite photograph from this project and why?

I don’t have a favourite photo. At the time this series explored a new aesthetic and way of working for myself. I am happy with what they say as a group of photos and the dialogue they create together. Individually, I don’t think they are very good. But, if I had to choose one at the risk of sounding like an arrogant prick, I would pick the one of Jordan sitting at a computer in his basement. The emotion in his eyes is kind of the peak of the series for me and it was exactly what I was trying to capture. I initially approached this as a literal photojournalist, but thanks to my mentors I was able to move this to more of a lyrical, less linear piece.

Your approach photographically seems very candid, how did that come about, was that your intention or did it just develop?

I think it is the style of working I am drawn to in general. I am a participant in all of the scenes and I think the viewer understands that, but I pull back when I choose to photograph and make my observations with the camera. It is kind of hard to explain, I basically just hang out.

After a while of shooting the project, did a bond between you and the people you photographed develop? Or was it more of a photographer and subject approach?

This was a very difficult part of shooting this work. I was so close with these guys I was kind of a part of the group; at one point half of my friends on Facebook were skinheads, which was kind of funny. I always made it clear who I was and why I was there though. I didn’t lie about my beliefs or opinions, they actually respected the dialogue when I presented counter arguments to their ideals. It is hard to describe.

They always jokingly introduced me as the journalist, which I was cool with. There was a few times that I had to establish the boundaries though.

Can you give a social situation as an example?

One winter night I was sitting on a bus with Rob, Tyler and Kevin (who at that time formed a group called WEB – Western European Bloodlines in Calgary, Canada,) headed to a downtown bar. Fueled by beer, their drunken actions differed from that of other young males in their demographic; instead of chasing girls, obnoxiously yelling or breaking stuff, the Nazis attention was directed at a group of three young Asians at the front of the bus. Wearing backpacks, white Nike shirts and flat brim hats, the last people these guys were expecting to ride a bus with that night were some of the most dangerous Skinheads in Canada.

Like any bully, the waters were tested with a few comments. Met with no response the Skin took advantage of their meek prey and began to question their language and heritage in an increasingly boisterous and aggressive way. Seconds away from the stop, the Skinheads were standing over this group of highschoolers, who were obviously very scared. As the doors opened, Rob, the unofficial leader of the group, called his friends off the kids. Rob was in violation of two terms of his various probation; if caught, a night out drinking would be a direct trip to jail. The other two welcomed this excuse to back out of a situation looking dominant and strong. They laughed into the night – getting off on the shot of adrenaline.

Seeing the fear, confusion and pain in the eyes of everyone on the bus was pretty tough. When their eyes pointed at me, I wanted to apologize and explain my role in the situation. That would have compromised my relationship with the Skinheads though. I am happy the situation did not turn violent, I wouldn’t have had a choice at that point.

Can you tell us more about this group’s particular social and political stance? Or did they fall into what most outsiders would assume a Neo Nazi group ideals would be?

Well, their views are pretty much in line up with the traditional Neo-Nazi Skinhead handbook. They believe that Zionists (an undefined group of Jewish people,) are slowly taking over the world and that Hitler was on the right path. Recently “non-whites” have become a major target with these white power groups. They see them as threatening the existence of the white race, through various ways, which is a pretty ridiculous argument with a lot of hotels in it.

It is hard to talk about and repeat these ideas publicly, they make my skin crawl. But these beliefs are still alive and strong behind a lot of closed doors around the world.

While being amongst this particular group of people, were there times when your opinion clashed and caused debate? Or did you place yourself firmly as someone who is there to document, and leave personal opinions aside?

I would never force my opinion on these guys, but when asked I was happy to offer it (although generally a little more diplomatically than this interview.) The key to my long term access with these guys was to actually listen with them and engage in a respectful debate. They really appreciated that and it is not something that happens often.

But generally, I tried to play the ‘fly on the wall’ photographer. I would just spend as much time with them as I could. After a day of being with them I would have to go back to the real world and hang out with my regular friends.

The Skinhead culture can mean many things, for some subcultures it’s just about the music and fashion, and there is no racism involved. Did the subjects express the reasons why they follow what they do?

It is hard to generalize how these guys initially became involved with these white power groups, everyone had different backgrounds, influences and beliefs coming in.

Largely, the ideaology initially perks the interest of a perspective Neo-Nazi Skinhead recruit. The main identifying factor would have been the will to belong to something; being accepted in a group was the main draw for new supporters and also the main recruitment tool.

Were there times when the opinions and political/social stance of this Neo Nazi group offended and troubled you? Did you keep a step back and approach it in a strict photographer relationship or did you speak your opinion?

There were a lot of situations where I was uncomfortable with how they were treating someone or the general discussion. I never had any major altercations with the Skinheads, but there were often instances where I had to make a quick decision on whether or not to intervene. In these instances I justified the fact that this behaviour would exist whether or not I was there with a camera or not, so if nothing else documenting it would be a positive thing.

What are your plans for the future?

I am currently photographing vigilante communities in Mexico. There have been over 20 communities who see their citizens arm themselves and take control of their towns.

My work has naturally gravitated towards photographing communities under extreme influence and the social conventions they develop to live a regular life. I am also photographing in Fort McMurray, Alberta, Canada, the boomtown associated with the Alberta Oil Sands.