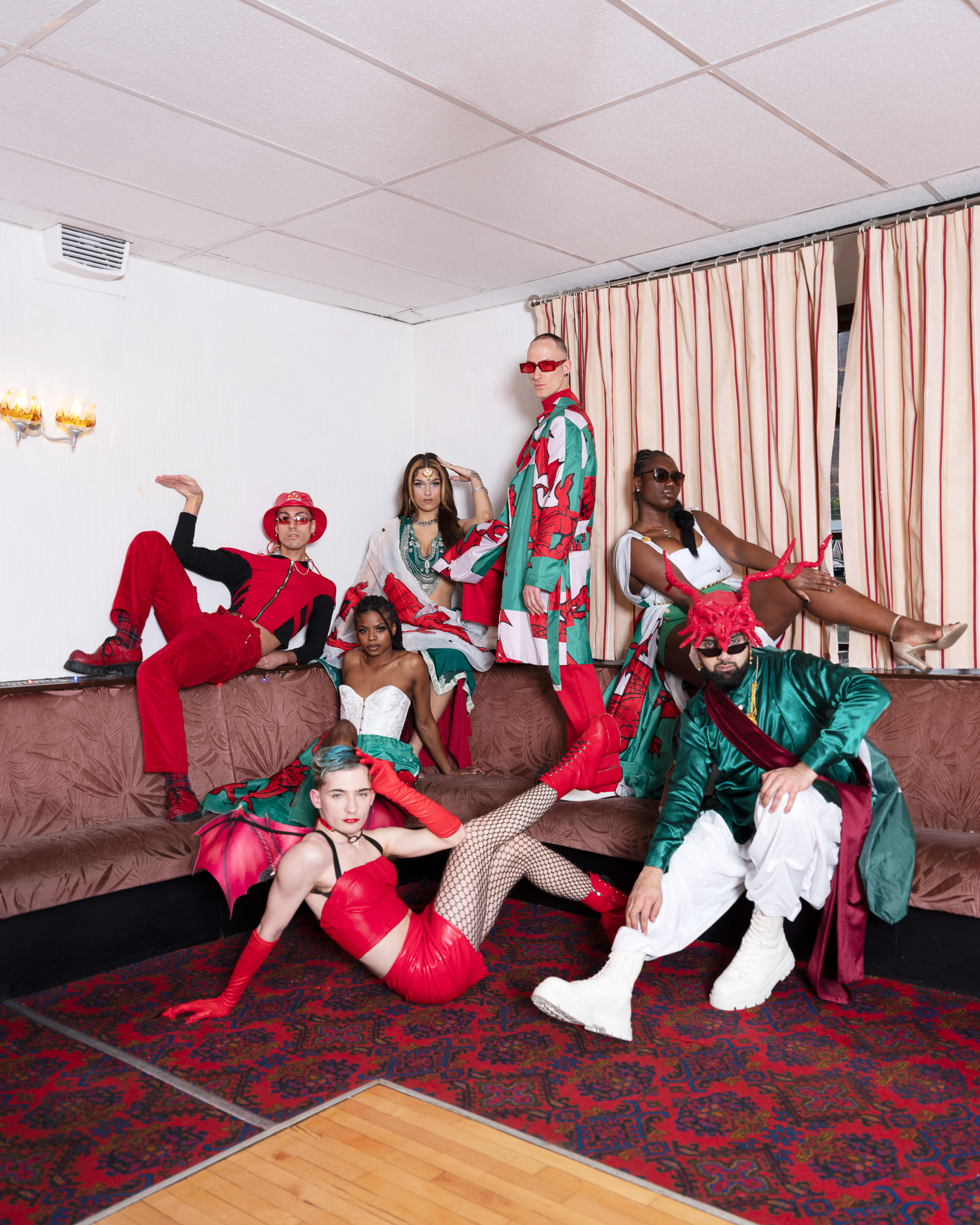 Formed during the 2020 pandemic, the Welsh Ballroom Community has grown significantly and gained international acclaim for its merging of different cultures with Welsh identity. Photographer Laurie Broughton spent time with the members, taking their portraits and celebrating their individuality snd solidarity for the LGBTQIA+ community.

Hey Laurie, lovely to have you for this weekend’s feature. I always kick off by asking people, what drew you to wanting to be a photographer?

I came to photography through traveling through Europe, I walked the Camino de Santiago, a pilgrimage through central Europe to Santiago Spain. I previously picked up a cheap camera which I used to document the trip. After returning I became conscious of how making images could construct a narrative, explore social issues, and used to question fundamentals in society. I had previously felt quite lost in my early twenties but photography had given me a medium, one which I could fit in my pocket, that pushed me to be curious about people’s lives and situations. Growing up I had watched vast amounts of cinema resonating with coming of age narratives, me and my best mate would try to watch all the latest Art house, films directors such as Ken Loach, Sofia Coppola, and Richard Linklater, seem to leave a lasting impression on my own reality of what life should look like through a lens.

The project we’re going to talk about is your recent series that spends time with the Welsh Ballroom Community. What initially drew you to wanting to spend time with the ballroom community?

In the summer of 2021, I had been aware of the Welsh ballroom community that had showcased a Welsh Ball in the Arcades of Cardiff. They are the real superstars of this series of images, I am just truly grateful for being able to work alongside them. The integrity, style, and enthusiasm they show for the culture of Ballroom are what inspired my interest in working with them, they are iconic, to say the least. Leighton who had founded the Community trusted my vision for the shoot. He understood that it was not only fitting to make these images in the Valleys, but important to homage to the Welsh Landscape and Welsh Identity.

For the benefit of the reader who might not be aware of Ballroom culture, can you explain what it is?

Starting in New York in Harlem, Ballroom culture was championed mainly by black and Latino queer people to express their queerness safely and escape societal prejudice like homophobia, transphobia, and racism. The ballroom has been a part of LGBT + history since the 1920s. Birthed from drag queen pageants in and around America’s east coast, Ballroom has evolved into a vibrant celebration of queer identity and offers a safe space for people to connect and meet like-minded people. Typically, three performance categories incorporate the dance style ‘Voguing’: Old Way, New Way, and Vogue Femme. With the movements derived from fashion models and their poses, the performance would normally entail a tournament-like approach with dancers battling it out to win over judges for the best score. Other, non-dancing categories include Realness, MC vs MC, Face, and countless others.

This community came together from the 2020 pandemic. How did they find each other during such a challenging time?

During the Covid-19 outbreak the Community formed through social media, for some of the members it felt necessary to bind themselves together over a common interest in moments that felt uncertain. After all, they represent a family and support network, encouraging each other to be expressive. Online platforms had given them the power to get mobilize themselves and once restrictions were lifted practice at the iconic Flame Studios.When the community could not rehearse they have been providing online workshops and history seminars provided by international figures within the Ballroom scene. Looking forward to the future they hoped to host Ball’s in Wales and create a Welsh “house” once the group becomes more respected and known.

Queer culture recently has been thrown into the mainstream with shows like Ru Pauls Drag Race which takes a lot of its language from 80s New York Ballroom and POSE.What do you think is the appeal to a cis straight audience of Ballroom?

Documenting Ballroom has always been an important part of the culture. It has preserved creations that will never be seen again, and it’s given communities visibility, where they have often been marginalized in society. Shows such as Ru Pauls Drag Race and POSE are responsible for introducing contemporary queer culture to a broader audience, many of whom have never attended a ball or seen a queen in real life. The popularity of such shows has meant more interest from a straight audience as it acts as a way to learn about queer culture, it’s certainly a good entry point though is not fully representative of all queer sub-culture.

Did you spend much time researching the history of Ballroom, like classic documentaries like Paris is Burning?

I had watched Paris is burning years ago, and I felt what I thought was fairly clued up by the mainstream representation of Ballroom dance. I was personally very drawn to the House music which surrounds the subculture. After spending time with the community and putting on a pop-up exhibition in Cardiff together with the Welshballroom community which presented an “Intro into Ballroom” in the Gallery space. A workshop illustrating the fundamentals of ballroom and trans influence through film and discussion, this experience was incredibly insightful into the art form, it led me to watch other documentaries and films such as How do I look, The Queen, and Hedwig And The Angry Inch. It even has allowed me to attempt voguing in a safe and encouraging atmosphere.

What makes the Ballroom scene in Wales so unique to other Ballrooms around the UK?

The Welsh heritage has always had a strong and proud identity, and the queer culture in Wale’s has also adopted that same unique strength. The Welsh Ballroom is unique in the landscape that surrounds the community, Its natural beauty, and visual form is juxtaposed with the degradation of the decline in industry of the 1980s. The Welsh Ballroom community is accepting of all other cultures and sexuality, they offer a safe space in which participants can be as individual as they like, in aberling expression through the historical dance culture.

The series really shows how the community embraces their welsh heritage as well as other cultures and identities. This inclusive way of coming together is really special to see. Are there any stories from them which stand out from your time with them?

The group is incredibly diverse in gender and from all walks of life, it’s reflective of how multi-cultural Cardiff is, though the group is able to build confidence in each and every member. Whilst making the pictures we climbed a mountain that looked over Tonypandy it was a really tough climb but I could feel the sense of camaraderie in the group who encouraged one another to get to the top, even when Bobby’s heels broke the group were whooping and cheering them to get to the top of the mountain. When making the images on the stage we were in a working men’s club on match day, Wales was playing on the screen and the bar was completely full. We got some strange looks from the regulars but the group just thought it was hilarious and strutted themselves through what felt quite a masculine environment.

What did you take from your time spent with this community?

My time spent with the group has left an everlasting impression on myself, they are so brave, and confident shown through the integrity, and enthusiasm they show for the culture of Ballroom. I feel as if it’s important to spread the word about how vital this group of individuals is to the future of Welsh culture and to keep showing support to them in any way I can. I still keep very much in contact with the Community, I know for certain they are going on to big things.

You can discover more of Laurie’s work here