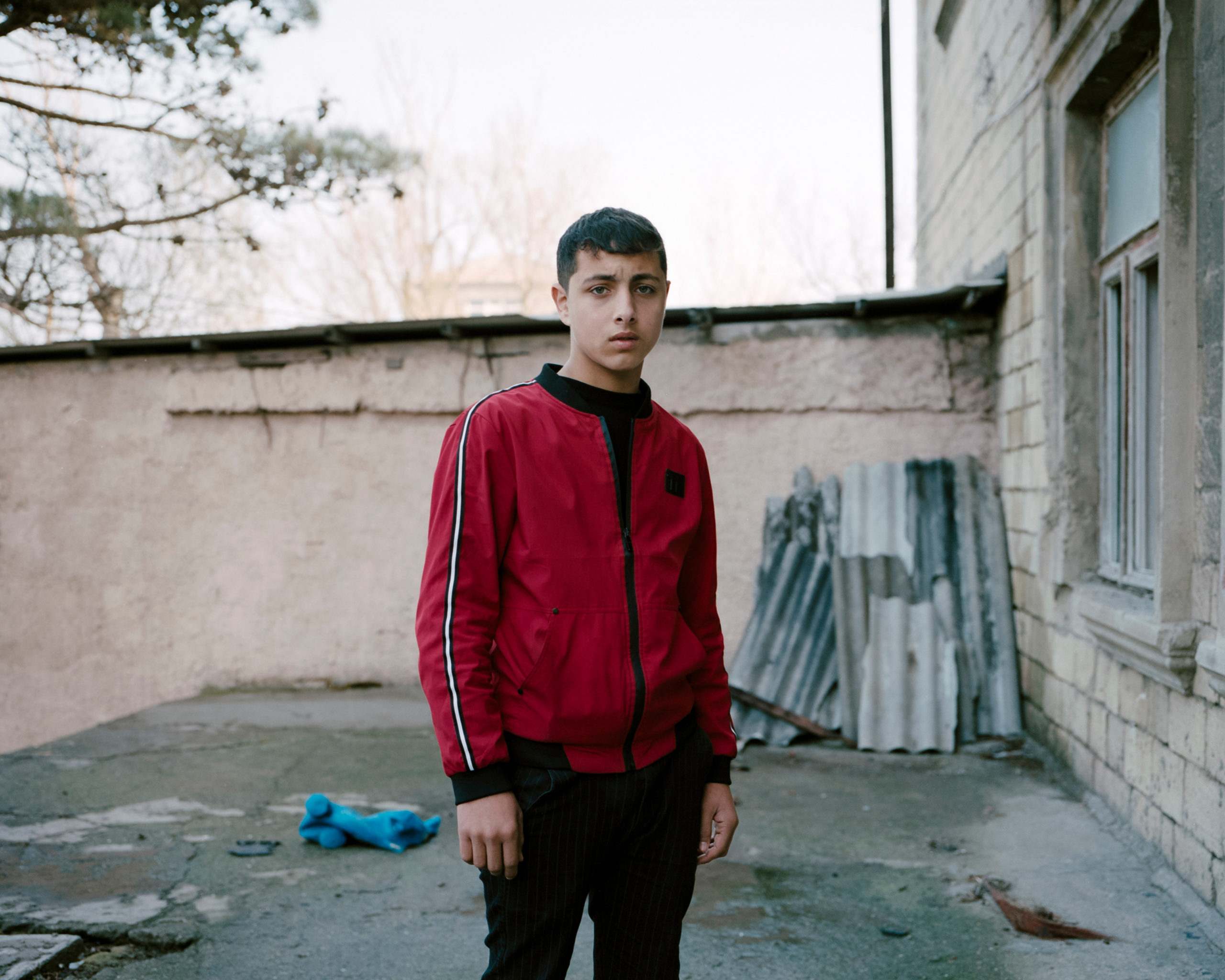 Hidden within an abandoned cinema, families live side by side as a result of the 1988 conflict between Azerbaijan and Armenia. Photographer Alessandro Perchiazzi spent time with documenting their lives and hearing their stories and produced his project, In Limbo.

Can you tell us more about what drove you to make this body of work?

I travelled through Azerbaijan for one month in September 2019 to conduct my research trip. I was fascinated by the strong sense of ambiguity I felt when I first visited the country. In the city centre of the capital Baku there has been a massive investment into its modernisation and yet it doesn’t take much to see its outstanding level of poverty. I was also fascinated by the fact that as many other ex-soviet republics, Azerbaijan holds one of the lowest places in the ranking of the human rights watch. Initially I wanted to collect multiple personal stories creating a narrative based on my first impressions. However, when I went to Sumgayit, Azerbaijan’s third largest city I met three internally displaced families living in an abandoned cinema for decades. I realised that the issue of the Nagorno-Karabakh frozen conflict is incredibly relevant to the past and present of Azerbaijani identity. To me it was just remarkable how united these families are. Despite being forced from their homes, they have managed to build their nests in the cinema whilst waiting for the conflict to end and being able to return home. I believe the issue of displacement is as relevant now as it is ever been before and what draws me the most into this work is the resilience showed by the families despite living in such ambiguous conditions.

The families are displaced as a result of Nagorno-Karabakh frozen conflict, can you elaborate more about the conflict?

The 1988 war conflict between Azerbaijan and Armenia caused the displacement of over 600.000 ethnic Azeris. Those affected are from Nagorno-Karabakh and seven surrounding districts which have been taken over by Armenian troops. This figure also includes ethnic Azeris from Armenia, all of which have been forced to flee to Azerbaijan. Although a minority achieved good living standards, others are still in a limbo; waiting to return to their homes. While the peace process between Armenia and Azerbaijan is still in stall, many have been occupying unfinished or abandoned buildings.

The images focus on the living conditions and also a sense of dread felt in the eyes of the families there. How did you go about making these images with the families?

During my research trip I met the families and spent with them few days. On my return I instantly decided to go back and spend longer with them. Whilst living in a room next to the cinema, I would spend almost every day with the families. Despite being a privileged outsider, I was welcomed and allowed to be part of many family dynamics which unfolded before me and my camera. At first, I didn’t immediately used my camera. It was important to me to establish a relationship in order to photograph. While sharing meals and stories during my time with them I tried to understand what it is like to be forced away from home. Eventually, everyone felt quite comfortable with me and the camera.

I was able to observe their inner strength which allowed them to coexist with their predicament and witness their somewhat optimistic outlook towards their future.

Are there any particular stories you heard which resonated with you?

Perhaps the one that resonates with me the most is that of Abulfaz, the man drinking tea. Abulfaz has managed to find a job as a security guard now and he and his wife Konul have two children. When he fled Qubadli, one of the districts taken over by Armenian troops, he lived in Russia and Ukraine for 20 years. In doing so he now has a Russian passport and because of this the Azerbaijani government does not grant him a full citizenship. Consequentially he and his family are not allowed to receive any help in their relocation until further notice.

The portrait of the young man in red is really striking. His eyes tell so much of what he is going through. Can you tell me more about his story?

The young man in red is Murad. Murad is now 14 years old and he was born in the cinema after his parents moved in it in 1998. He is one of the people whom I bonded the most with. Even though we would always need a translator to communicate, Murad would often sneak away from his family to share a cigarette with me or invite me over for some tea. Murad to me represents the strongest of all, a really decent kid who shows a unique inner strength.

What is the future for these people? Is there any support to get them into safer places to live?

Out of the three families, only one has been offered relocation which it should happen by the end of the year. None of them receives help from the government and they are all self-reliant but of course that still mean remaining poor. The main hope for them is the end of the war and the possibility of returning to their homes.