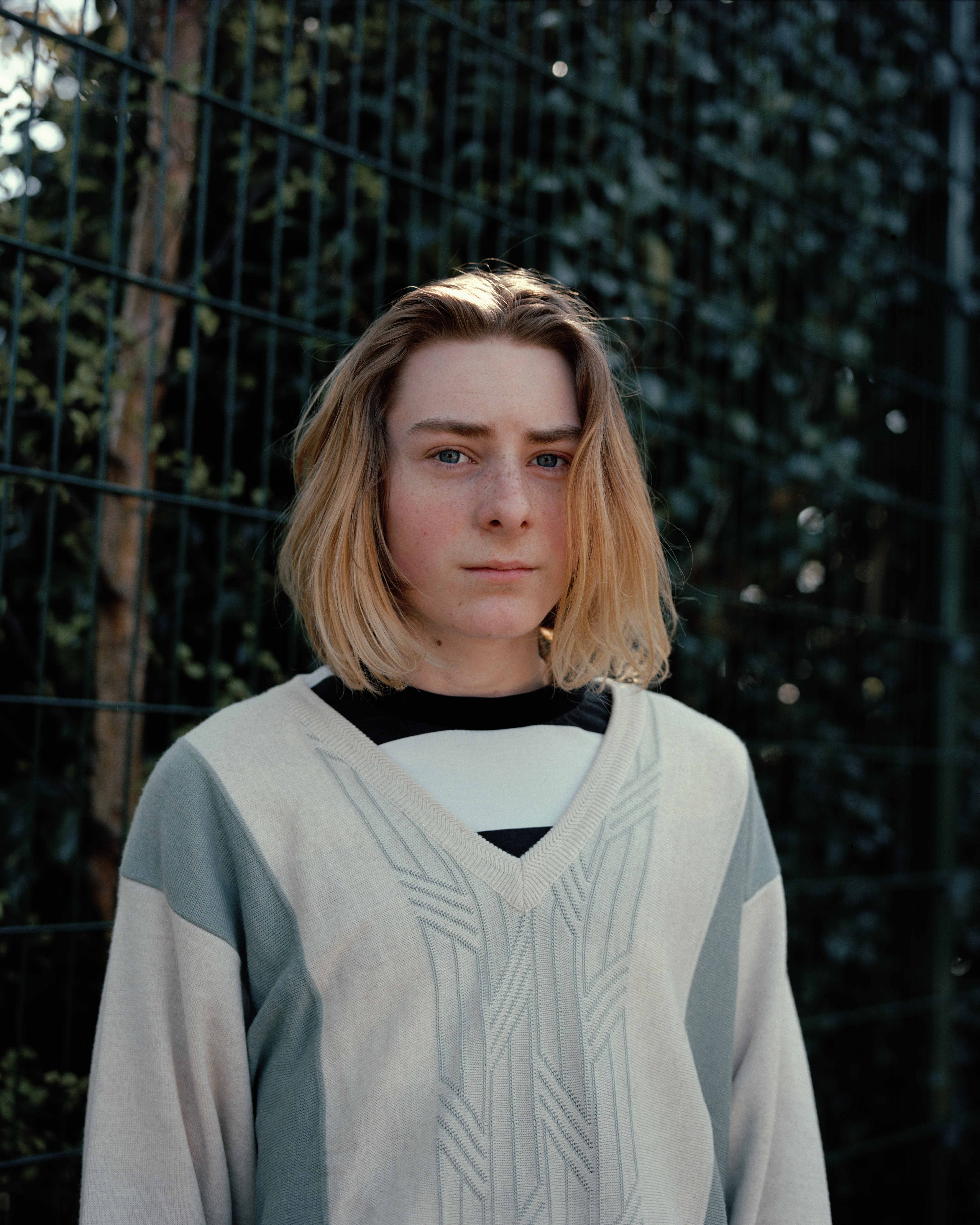 HOME. A complex word and place. A place where we can be ourselves, a place we want to escape, a place we find comfort and purpose. With every positive experience of a home or home town you can hear of a negative. We recently spoke with Jake Varker about his series In the Shadow of the Rose.

Firstly, what got you into making pictures?

When I finished school I started an art course at college, this is where I was introduced to analogue photography and the darkroom. Like many when they see the magical qualities of film, I was hooked, I loved the process and craft of making pictures using analogue techniques. A lot of my time outside the course was spent out on my mountain bike with friends, I would focus on taking pictures of them flying through the air on their bikes. I wouldn’t always take these pictures for my friends so they could look at themselves, it was mainly because I wanted to create photos that others could enjoy and not just enjoyed by me and my mates. This led to me being curious about the potential of pictures as well as using the camera to engage with the world and my surroundings.

During this time, I was being shown photobooks made by contemporary documentary photographers such as Alec Soth, Sian Davey, and Leonie Hampton, I was confused but amazed as it wasn’t like any other photography I’d seen. I would look at individual images and think about how the photographer created those tones, colours, and composition, it wasn’t like anything I’d ever seen. I couldn’t explain it at the time, but I knew those type of images were special, I had this desire to learn the craft and make something like that. Then there was the photobook itself, what did it do? What was its purpose? Why were the images seen in a certain order? It was these questions that stuck with me and that I still think about now.

Can you tell me a little about your most recent series In the Shadow of the Rose and how it came about?

Fundamentally, In the Shadow of the Rose is a lyrical response to the relationship I have with my hometown, St Austell, which is a town located in Cornwall. When I was 19, I moved away to study photography at university, like many young people when they move away from home I started to rapidly develop as an individual and further understand the world and myself. As I lived my life away from my family and childhood memories, I started to develop strong and confusing feelings about my hometown, I found myself feeling indifferent to the place as well as disconnected to it and the people there. I found this difficult to process as I had family there and like any hometown it served as an important part of my life. From my strong desire to create and my interest in places I aimed to use photography and its process to recognise and understand my feelings. I also wanted to communicate St Austell’s feelings of restlessness and hope, like many towns in Cornwall it was being affected by economic and global circumstances. What I found more compelling to me and useful was to almost see my work and make it a work of fiction, I was using my own feelings and vision of the town to make my own version of the place, a place where my emotions could sit and rest.

It’s been a year now since I put the project to rest. I’m unsure if it’s completely finished, on one hand my feelings towards the town have subsided, as I’ve matured, I have come to terms with the changes of life and how I see the places which I inhabit. But on the other hand, I would never say never to going back and making more work there as I think I could expand the project to something more multifarious.

In the Shadow of the Rose opens with a poem by Charles Bukowski, how did this work by Bukowski influence the series?

When I started the project, I was discovering the connection between poetry and photography. They are both limited to what they can tell the viewer, they lend themselves naturally to letting the viewer fill in the gaps and bring something to the poem or photograph. The two art forms also aren’t very good at telling stories but are better at hinting at them. I already really enjoys novels so realising this connection made me want to read more poetry, I wanted to find material that was similar to my own intentions and that would inspire me and my work. I discovered Bukowski and liked the way his poetry had a rawness yet beauty to it; he used his own life and experiences as a source of material. I bought a book of his poems and the last poem in the book was ‘In the Shadow of the Rose’, I found the title significant as it suggested many things, one of them being how St Austell fits into Cornwall. Cornwall is seen as a paradise with its beaches and countryside, yet towns like St Austell exist there. Then there was the poem itself, the feeling it created seemed to get at the same feeling I had towards my hometown.

The portraits within the series don’t feel hopeful or positive. There’s a sense of dread in their eyes. Is this something you wanted to push and highlight?

Yes, it definitely was. As I mentioned, my feelings towards the town have now subsided, but back when I was making the project my feelings were so strong I just wanted to visually express them. One way of doing this was through the portraits, I wanted to express the feelings of being young and stuck in a town as well as how I felt when I came back to St Austell. When I would meet people and photograph them, I would explain my project and intentions, we would connect by us both being young and having grown up in the town, then when I would raise the camera and take a photo, they naturally took that sort of expression, I think they really understood what I was trying to do. Then with the photos I made I wanted to stitch them together to create a sense of place, having this strong look in the people’s eyes took this place to a new level, it said something about being young and the time that we live in, it also created a place which was uniquely mine and theirs.

There is a strange connection between the beauty you’ve captured in your photographs and a deep sense of loss and sadness in the scenes as well. Can you express more on that?

This is something I think about a lot and wanted to include within the series, I’m a believer that beauty and sadness coexist, I like to use the terms hope and despair, there isn’t one without the other and they live so closely together. I can be somewhere or doing something and feel the too emotions at once, it’s a strange feeling but somewhat calming at the same time, it creates this balance within myself and the world. In terms of the series, when I first started it, I just wanted to show the despair and loss, but as the project developed, I found there were glimpses of hope. I saw hope in the people I was photographing, and it felt right to respond to the feelings they made me feel. When it came to the editing process it seemed natural to have these photos of hope and despair exist together, a project with too much despair and sadness doesn’t really work, and work with too much hope or beauty also doesn’t work for me, it’s in the balance of the two where things get exciting and something special can be made.

As a photographer, what drives you to pick up your camera and tell stories?

I’ve recently found the idea of simply ‘making’ inspiring, to make something that wasn’t there before I came along is exciting. I like to see the idea of creating in a simple approach, the photographs and work I make can be simple sentences or paragraphs of what I want to express. They can merely provide something for the viewer, they don’t need to be part of some ground-breaking research, this helps ease the pressure of creating art and make it more enjoyable, especially for a younger person.

As for telling stories, I think photography struggles to tell stories, I think if I wanted to tell coherent stories I would use literature or moving image, instead the things in my head can’t really be told as stories but felt as an emotion. As I’m constantly changing and experiencing different things, I’m motivated to welcome this and use photography as a tool to understand what is to come. However, I am interested in the possibility and development of storytelling, art forms like photography allows for a version of storytelling which is a lot more open than other forms. If done well it can appreciate the viewers intelligence and ability to bring something to the work, this inspires me to pick up my camera and explore what is possible with photography.