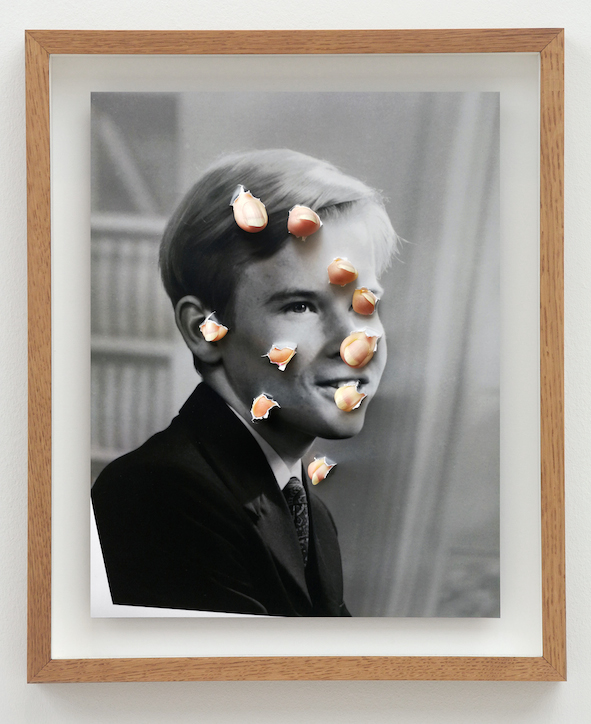 “Was it ever real to begin with?” Jonny Briggs Sheds Light on his Creative Process

In an age of photography where digital manipulation is king, Jonny Briggs’ work challenges the viewer’s perceptions of what is real and what is fake. Using physical methods to manipulate his images, they seem to come from a more organic place, and hold a stronger sense of meaning. As well as working within the parameters of physical manipulation, he questions the legitimacy of life within a photograph  “ photography is inescapably about lying – it’s representing something that isn’t there.”

Briggs uses the process of physical manipulation and notions of truth to explore his own family history and memory, in his own words he aims to “re-capture childhood nature through my assuming adult eyes.” While some may shy away from the thought of working with family as subjects, Brigg’s found it flowed naturally for him giving the space to explore subjects and emotions that would otherwise lay dormant. Voicing things he stayed silent about during his childhood. It is fair to say his work walks the lines of reality and fiction. Ambiguously sharing his family truth.

His creative process certainly stands out, from the initial spark to the conception, below Briggs walks us through his process and gives us an insight to how he works with such personal topics in a unique way.

What initially inspired you to explore the ideas of family and memory?

Ever since art foundation, I started making work about my family and memory, and I’m unsure what provoked this pathway. The simplest reason I can give is that every time I think about my family, ideas would spark – so I’ve just followed these interests and seen where they’ve taken me. I was pretty quiet throughout childhood and adolescence, especially about what was happening at home, so I wonder if the work might be an opportunity to have a voice – to make what was once silent heard.

Did you ever find it artistically conflicting or difficult exploring such personal topics?

I find it’s often the opposite – it’s easy, and the ideas flow. It feels liberating to make work, to have ideas, to have an outlet for issues once bottled. With the artwork, you can both say something and not say something at the same time. You can communicate ambiguities and contradictions, and open up questions rather than close down into neatly packaged answers. Sometimes there isn’t an easy answer, and sometimes a contradiction is more honest. Through the artwork, uncertainties can have a voice.

Your photographs include your family members, for example My Blood and Consuming a Grief That is Yet to Come. How did you find creating an artistic relationship with your family, did it come naturally and how was it conceived?

2004 onwards I started making work involving my family. It felt like it made sense before I thought it made sense (if that makes sense?!) It felt like opening a can of worms. I have too many ideas and not enough time or funds to make them haha!

Your work is quite abstract in the fact that they are performative and physically altered. Does this approach involve a lot of trial and error with ideas that don’t work out, or do you have a set of concepts now that are failsafe?

When coming up with ideas, I feel free and floaty, sparking ideas as intuitively and spontaneously as possible. Making these feels like I can never do justice to the idea, and there are a lot of works that I haven’t released, and photographs that I’ve ended up re-shooting, because composition didn’t align, or the lighting was slightly off, or the body language wasn’t how I wanted it. Sometimes parts of a work can go wrong in  a good way – the way the making process deviates from the initial idea can take me into an area I connect with.Though with most shoots, I take hundreds of photographs – sometimes thousands. This is one of the reasons I’ve moved away from working with large format analogue cameras. Working digitally has given me a license to be more performative, experimental with the image making process.

What a photograph is and can be has expanded – and is continuing to expand. Whether digital or analogue, photography is inescapably about lying – it’s representing something that isn’t there. Yet lies can point to truths. This suspension between what’s real and what’s not takes me back to the childhood mindset of not knowing what’s real and what’s fantasy, where anything is possible. A friend of mine in the Magic Circle said the question he’s most commonly asked is ‘how did you do it?’ Every now and then, he would reveal to a group how a trick was performed – yet each time he did, their response would be one of disappointment. I enjoy it when someone assumes one of my photographs to be Photoshopped. There are often clues in my photographs as to where the truth of the image lies. Yet even these can be bluffs, double bluffs or triple bluffs. Was it ever real to begin with? I’m working with my experience of deception, through a medium of deception. The constructed reality of the family, through the constructed reality of photography.

Your artist statement says that through your work you, “attempt to re-capture childhood nature through my assuming adult eyes.” How easy was it for you to find the medium between childhood and adulthood?

It’s an impossible task to connect with myself when I was younger  – particularly as the more I move into adulthood, the more my childhood self becomes a stranger to me. I find this comes in to play whenever I show a person a photograph of myself as a child – I feel torn between saying ‘this is me’ and ‘this was me.’ The characters in the photographs feel somewhere between my parents and I, somewhere between us then and us now. I want to go back and fix things, but i know i can’t do that. The art making process can be a way to reconstruct the past, or give it a new shape.

Could you walk us through your creative process, from initial idea/moment of inspiration to conception?

The usual way I’ll come up with ideas is by drinking lots of coffee, and sitting alone with my notebook. I’ll usually like to be around nature. The other day I had a new idea for a scene pop into my mind while in the shower, seemingly emerging out of the blue. I’ll sketch out ideas, sometimes words or phrases, onto post it notes, and stick them up at home, so I can constantly look at them, digest them, move the post it notes into clusters of ideas, and sometimes combine them. Often one idea will spark another, like a domino effect. I love the idea-sparking stage. The making stage I like less so, because it’s such a challenge to do justice to the idea. The smallest of decisions seem to make the greatest of impacts.

What piece of advice would you give to creatives wanting to explore more tactile and performative ways of creating work?

Focus on your own journey of interest and see where it takes you. Everyone has their own methodology, their own visual language, their own conceptual language, and it takes a while to clear the fog of what your own is – so be patient with yourself and keep going. It can be so easy to attempt to see your work through other people’s eyes, yet the most important eyes to see your work through are your own. If you make what you think others want, your work will always be second guessing, and most likely over-thought. You don’t have to understand what you’re getting at or why you’re making the work you’re making, in order to get value from it.

Want to feature on Darwin Magazine? Submit your work to submit@darwinmagazine.co.uk

Join our community and stay tuned for updates and opportunities here – www.instagram.com/darwinmagazine/